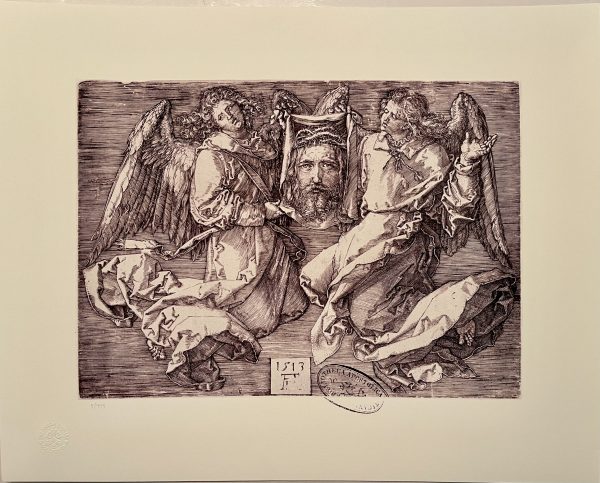 The Sudarium by Albrecht Dürer

The impression of Christ’s sweat is said to have formed the original Sudarium when a widow wiped his brow as he paused on the way to his death at Golgotha.

Another relic of Christianity that has been associated with the Shroud of Turin is the Sudarium of Oviedo. The Sudarium is a piece of cloth roughly 84 cm x 53 cm. It has stains on it, but no recognizable features. According to legend, the Sudarium was the facial covering that lay on Jesus’ face under the shroud after crucifixion. It is mentioned in John 20:7, where it was found apparently cast off after Jesus’ resurrection.

Limited Edition of 995, numbered. Comes with a certificate of authenticity.

These are no longer being made. These are the last five.

Albrecht Dürer’s technically groundbreaking body of drawings and prints had a profound and lasting influence on the development of European art. Initially trained as a goldsmith by his father, Dürer was schooled in painting by Michael Wolgemut and began making works on paper in the 1490s.

Born in the German town of Nuremberg—a prosperous free city of the Holy Roman Empire and a center of commerce, book printing, and humanist learning—Dürer grew up in a culturally and artistically stimulating environment. He further expanded his intellectual horizons by traveling twice to Italy in his youth and once to the Netherlands as a mature artist. In addition to several paintings, Dürer produced works on paper of unparalleled sophistication. He worked in drawing, woodcut, and engraving—even briefly trying his hand at the less common techniques of etching and drypoint.

Durer’s drawings, such as the Art Institute’s Young Bull, are remarkable for their realism and refined penmanship. His unprecedentedly meticulous engravings, such as Nemesis, precisely conveyed surfaces, textures, and subtle effects of light. His wooducts—like his famous Apocalypse series or The Men’s Bath—were ambitious in terms of size, graphic complexity, and the variety and novelty of the subjects depicted. The Art Institute holds a comprehensive collection of Dürer’s prints that includes some rare and extremely fine impressions.