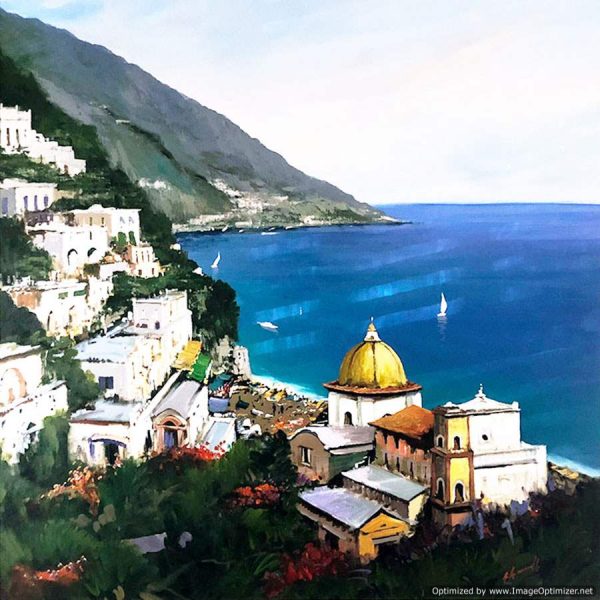 View of the Mediterranean Sea and Positano on the Southern West Coast of Italy in the Amalfi Coast region.

This is an amazing work of art that will transport you to a place of peaceful serenity with every glance. This is one of our favorite artist’s. We have several of his pieces in our personal collection.

Antonio Iannicelli was born in Naples in 1952, but currently lives and works in Castelvolturno.  As a boy, he showed a great inclination for painting and was inspired by the sea, which had such a vital impact on everyday life.  Furthermore, he was captivated by the warmth and hospitality of his region, and sought to convey this vivacious cultural heritage of Naples.

Iannicelli excels in coastal and landscape views where he captures the fleeting light of the moment.  He gives the spectator a private view perched atop a secluded cliff, gazing across the unmistakably breathtaking Amalfi coast.  Anyone that owns his paintings is instantly transported to these quaint villages nestled between dynamic Italian cliffscapes, and the dazzling emerald coastlines of Southern Italy.

Iannicelli has staged over twenty personal exhibits in Italy, as well as abroad.  He also consistently exhibits in the most prestigious national art shows around the world.  Antonio’s works are found in public and private collections throughout Europe and the U.S.  He has won many esteemed titles: in Naples 1987 Premio Partenope, First Prize Bari 1994, Collectiva Pugliese ll Classe in Siena 1997, and a one-man exhibit in Rome 1999 Premio Urbe Silver Medal.  Winning numerous awards and prizes, Iannicelli’s work is gaining admiration in Italy and beyond its national bounds into the United States and France.  He excels, above all, in coastal Venetian views and landscapes, where he manages to render unusual aspects with expressive immediateness.

Stylistically, his works reveal influence of the Old Italian masters, but also portray his instinctive likeness to post-impressionists such as Cezanne.  As a result, his works yield both classical subjects covered by the bold color schemes and lighting of a more modern era.  Anazao Galleries is proud to represent the work of Antonio Iannicelli.