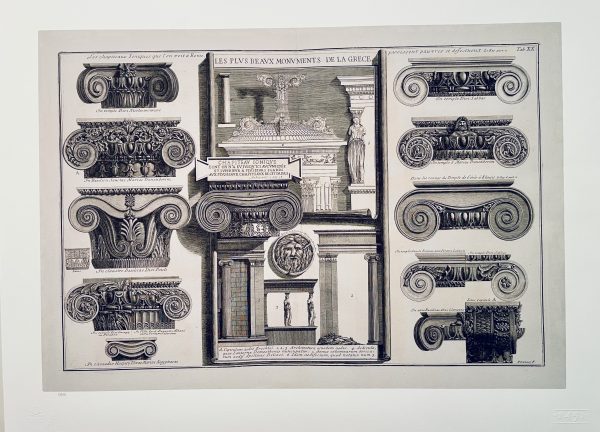 Exquisite details of corbels, columns and urns from Roman architectural ruins. Part of a much sought after series.

Limited Edition of 100, numbered 5/150. Comes with a certificate of authenticity.

Giovanni Piranesi is best known for his classical engravings that incorporate real and imaginary Roman architecture. While apprenticed to his engineer uncle, Piranesi gleaned the finer points of design, archaeology and drawing. Fascinated with perspective and composition, he combined practical techniques with an interest in theory and ancient history. Thus, he undertook a series of etchings on Roman architecture, some historically accurate, and some that diverged into a world of fantasy. Piranesi believed that the ideals of classical architecture, fused with his personal vision, spoke to the type of intellectual design that conjured up the splendor of ancient Rome. He also believed that the restoration of Rome’s architectural glory would benefit society, as living spaces have a perceptible psychological effect on their inhabitants.

Piranesi completed a folio dedicated to Pope dement XIII on the grandeur of Roman architecture called Della Magnificenza ed Architettura de Romani. Combining illustrations and scholarly text, Piranesi asserts that Roman architecture was derived from the functional achievements of the Etruscans, not the Greeks. He retracted this claim, however, in the following Verdute folio, a highly sought-after series. Translated, verduta means “view”, but for Piranesi, it meant scenes and landscapes with spatial and perspective accuracy within a luminous atmosphere. Both series included views of fragments and architectural ruins in Rome and Greece. Etchings focused on the corbels, columns, urns, and collections of interesting rubble from buildings and landscapes.

Piranesi’s overwhelming vision for the future encompassed the re- birth of early Roman ideals and a return to design that spoke to historical theories on architecture. When old and in poor health, Piranesi remarked that he had a deep desire to produce great ideas, and that if he were ever commissioned to design a new universe, he would be mad enough to accept the challenge.