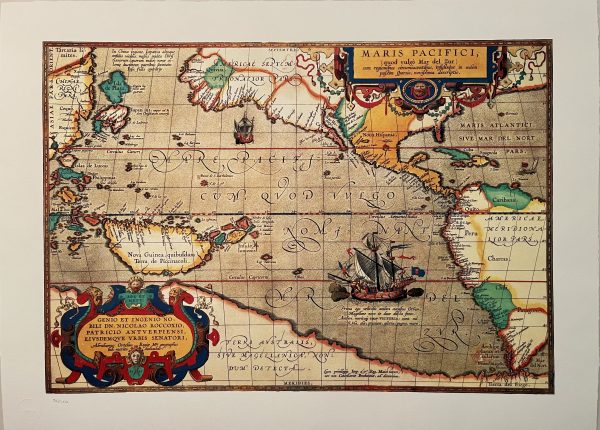 Limited Edition of 150, numbered 30/150. Comes with a certificate of authenticity.

Blind embossed with the seal of Circa Publishing!

These are no longer being made. These are the last one.

Maris Pacifici by Abraham Ortelius. This map was published in 1589 in his Theatrum Orbis Terrarum. It was not only the first printed map of the Pacific, but it also showed the Americas for the first time.

also known as Ortels, Orthellius, Wortels; 14 April 1527 – 28 June 1598) was a Brabantian cartographer, geographer, and cosmographer, conventionally recognized as the creator of the first modern atlas, the Theatrum Orbis Terrarum (Theatre of the World). Ortelius is often considered one of the founders of the Netherlandish school of cartography and one of the most notable figures of the school in its golden age (approximately 1570s–1670s). The publication of his atlas in 1570 is often considered as the official beginning of the Golden Age of Netherlandish cartography. He is also believed to be the first person to imagine that the continents were joined before drifting to their present positions.[1]