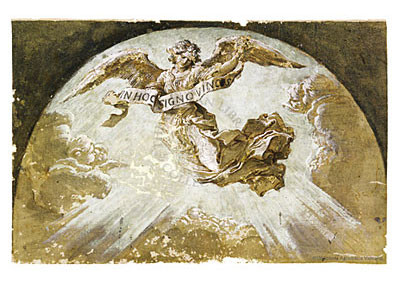 Angel Bearing A Cartouche by Bernini

Exquisite drawing was designed for a sculpture to complete the decoration of the pier of St. Helena carrying the cross within St. Peter’s Basilica.

Limited Edition of 500, numbered 16/500. Comes with a certificate of authenticity.

These are no longer being made. These are the last three.

Bernini was an Italian artist and a prominent architect who worked principally in Rome. He was the leading sculptor of his age, credited with creating the Baroque style of sculpture. In addition, he painted, wrote plays, and designed metalwork and stage sets.

Bernini possessed the ability to depict dramatic narratives with characters showing intense psychological states, but also organise large-scale sculptural works which convey a magnificent grandeur. His skill in manipulating marble ensured he was considered a worthy successor of Michelangelo, far outshining other sculptors of his generation, including his rival, Alessandro Algardi. His talent extended beyond the confines of his sculpture to consideration of the setting in which it would be situated; his ability to synthesise sculpture, painting and architecture into a coherent conceptual and visual whole has been termed by the art historian Irving Lavin the “unity of the visual arts”. A deeply religious man, working in Counter Reformation Rome, Bernini used light as an important metaphorical device in the perception of his religious settings, often using hidden light sources that could intensify the focus of religious worship, or enhance the dramatic moment of a sculptural narrative.