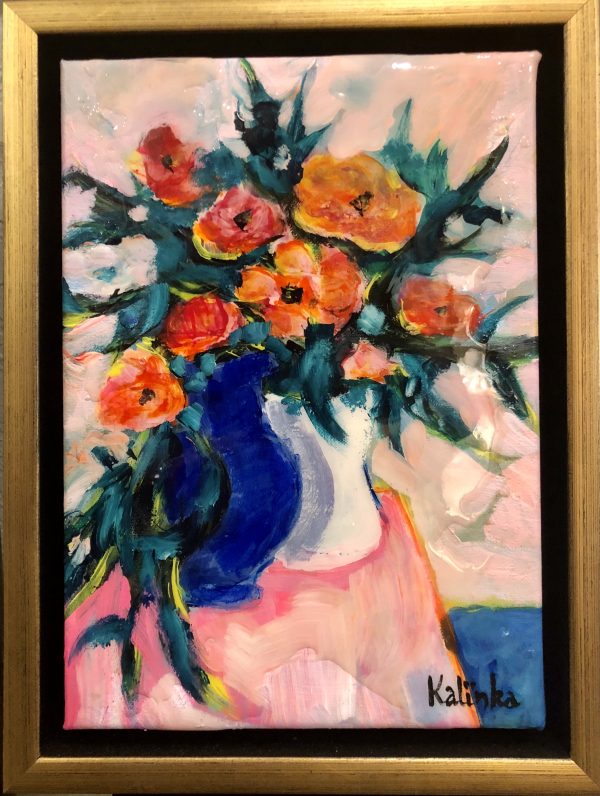 Colorful Flowers in a Vase by Kalinka Duaiv

Hand-painted, original oil painting on canvas presented in a gold designer frame.
It is ready to hang and enjoy.

Kalinka Duaiv was born in Paris on August 14, 1977. She is the daughter of the famous painter DUAIV.

As a very young girl, Kalinka was immersed in the artistic life of her parents. At the age of seventeen, she began to organize exhibits of her father’s artwork in France, in Cannes and Port la Galere (one of Pierre Cardin’s clubs); in Switzerland, at the Geneva Hilton, at Crans Montana and later at her Restaurant-Gallery, “l’Esquisse” in Geneva.

In Belgium, Kalinka Duaiv met her future husband at one of her art exhibits at the Brussels Hilton.  From 2000 until 2003, she was the President of the “Societe OMNIPRESTIGE” which exports all of her father’s paintings to the United States and she still represents DUAIV in Europe. Even as a mother of two sons, Mathias and Thomas, Kalinka was continuing her involvement in the art world.

In 2007, Kalinka began to devote her life exclusively to painting. She works exclusively with mixed media, pallet knife, brush and paint roller. She creates mainly landscapes, flowers and boats. After several exhibits of her own work in Paris, Cannes and Belgium, where she lives – All of her paintings are now exhibited and sold in galleries and cruise ships in the United States.