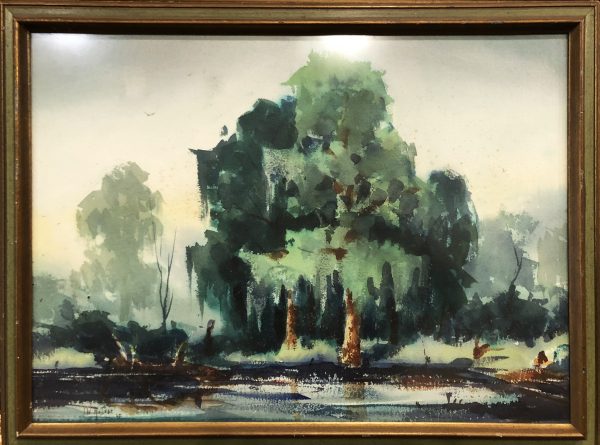 When Hickory resident John McIver decided to donate two paintings to HMA in 2012, Kate Worm (then HMA’s Collections Curator) interviewed him about his work. In McIver’s own words, “After watercolor, all the other media were simple.”

“[One] influence of mine was John Pike [who was a well-known watercolorist and illustrator]. He built a barn up in Woodstock NY [in 1960] and started holding classes there [until 1979]. He’s the only person I took lessons from. … He had quite an effect, and it was a long way from painting like John Pike and the way I paint now, which is nonobjective.”

“For a while I was torn which way to go because the New York School [of abstract expressionist painting] was fashionable. Working with transparent watercolor was kind of dated. I have a great appreciation for watercolor and the representational way [but] I think that as I’ve gone along I’m more and more interested in all kinds of abstraction.”

He received an A.B. from Trinity College in CT, but became a self-taught painter of watercolors. He in tum taught others in his home town of Jacksonville, where he lived, exhibited, and sold numerous pieces of work to members of the community until 1967, when he then moved to Evansville, IN and later Grandville, MI. He continued to paint representational watercolors for thirty-six years up to 1993, when he abruptly changed his style and produced abstract canvases instead, though he still works in the watercolor medium. A 2005 exhibit recently described his present work as “collage and crafts energy-filled canvases of color, light, and texture … reminiscent of delicate Japanese-inspired textiles!” He presently lives in Hickory, N.C., and is still exhibiting his works within the state.

John Kolb McIver (below right) was born in Jacksonville, FL in 1931. After graduating from Trinity College in Hartford, CT, he returned to Jacksonville where he taught himself to paint with watercolors and in turn taught others, at the Jacksonville Art Museum for one. He moved to Evansville, IN in 1967 where he lived until 1975, and then he lived in Grandville, MI before settling in Hickory, NC in the 1990’s.

McIver worked in a representational style until 1993 when he abruptly started producing abstract pieces. At a 2005 exhibit at Charlotte’s Modern Eye Gallery, he was described as “renowned for his previous work in watercolor, for which he has been awarded many honors. In this current body of work, he turns his expression to collage, and crafts energy-filled canvases of color, light, and texture. His work is reminiscent of delicate Japanese-inspired textiles.” (Carolina Arts, May 2006)

Mr. McIver is a member of the American Watercolor Society and has exhibited his works there and with the Southern Watercolor Society. Among the collections which hold his work are the Oklahoma Museum of Oklahoma City, the Jacksonville Art Museum, and the Asheville (N.C.) Art Museum. His painting that we own, “Untitled”, belongs to his earlier, representa­tional period.